What is the Zambian Music Timeline?

Zambian Music Timeline (ZMT) is a web app developed by One Ziko. ZMT is just one of several apps that are being developed, with a focus on Zambian-ness. So, why have a Zambian music timeline? We believe it is important to document history in our music industry as it is being made, archiving it and making it available to ourselves and generations to come. We have very few available records, if any, or a resource, of what has been happening on the Zambian music scene and it is our aim to consolidate this information in a centralised database. We aim to capture: Album/ Single releases, Music Video releases, events such as Album launches, Award Ceremonies and any other significant event linked to Zambian music and artists.

We started the ZMT project sometime in 2012 and the first iteration went live on 3rd May, 2012, with contributions from Chizzo @chizzoz, Cri$i$ aka Mr. Swagger @hiphopcrisis, Dj Drex of Hip Hop To Rock Your Block, Dyplomat of Pitch Black and The Holstar @theholstarmusic. The first iteration was very basic, just a few files updated manually. Later in 2013, the second iteration of the ZMT was launched on 10th November, 2013, with added contributions from Chilu Lemba @ChiluLemba. Caesar Cognac @caesarcognac and Kabinda Lemba @kabindalemba were also added as contributors. The second iteration moved from files to a Google Docs system, contributors were invited via email.

Starting the third and new iteration of the ZMT on 20th March, 2017, we have automated every aspect of the previous manual process, moved from using Google Docs and created a platform dedicated to documenting Zambian Music progression. On the new platform, anyone can be a contributor, you can easily go to the register page, sign up and get started, no need to be invited by email. Initially, the ZMT just had only one view, the linear horizontal scrolling view, but now, we have content represented in three (3) different synchronised views; The Grid View, Line View and the Table View. 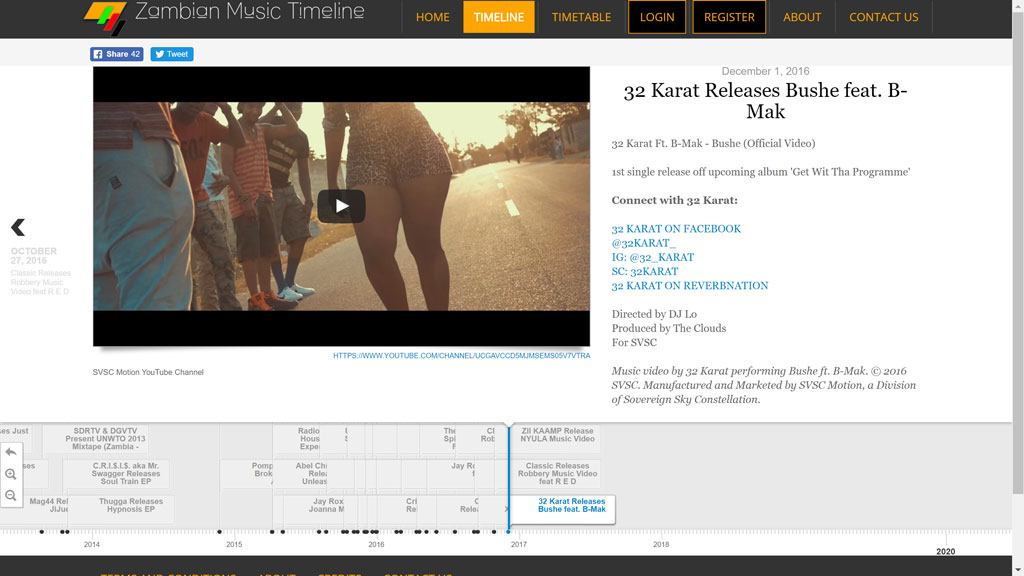 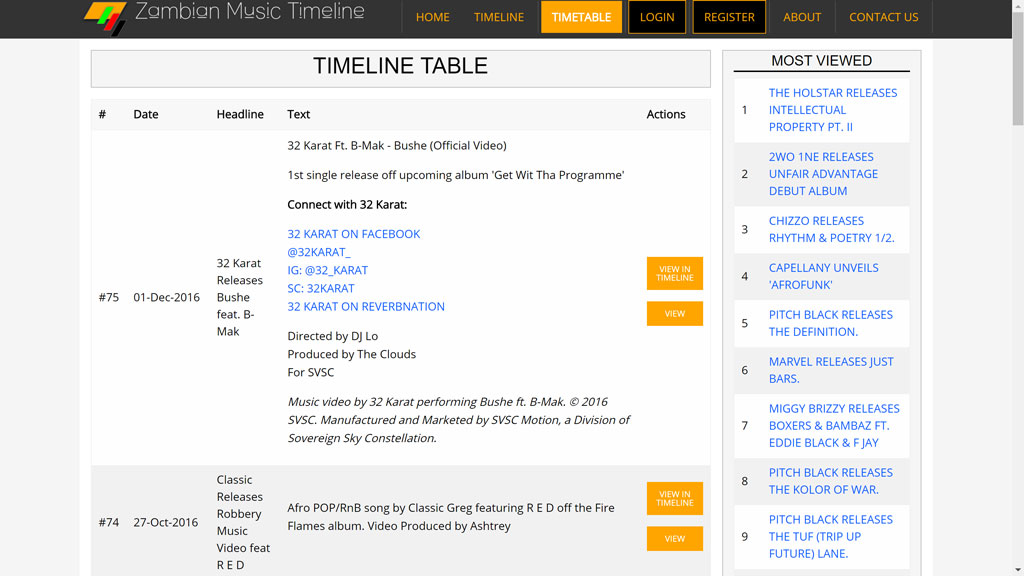 Are you interested in sharing information and contributing to our music industry's history? Primarily, ZMT is directly targeting the influencers of the Zambian music industry, so as to maintain accuracy in information. If you are a Music Recording Artist, a Performing Artist, a Music Producer, an Artist/'s Manager, a Recording Studio, a Record Label, an Event Organiser, or similar, ZMT is for you. We have also made provision to accommodate enthusiasts/ individuals who are interested in the happenings of the industry, people who were present and recall certain events in history and so on. If you know about something that happened or will happen, in connection with our music industry, feel free to share it here.

If contributing to documenting Zambian music history is not enough for you, we have a few incentives we hope you will like.

Anyone with interest... in Zambian music and internet bundles (not social bundles) can access the ZMT web app for free. Feel free to register or login to get started as a contributor or feel free to just browse through; view, “Check”

We appreciate your attention and we are looking forward to have you contribute to documenting the history of Zambian music.